Regular Juice readers know that use of the bird has consequences. Here’s the latest installment of “The Bird” as reported by TCPalm.com:

St. Lucie County sheriff’s deputies went to an address in the 200 block of Camino Del Rio and spoke to the 70-year-old man. The man told deputies he was standing outside when he saw [Stephanie Maria] Mayerson [age 58] and her husband driving by. He said he “shot them the ‘middle finger,'” an affidavit states. Asked why he did so, the man said, “I do not like them for my own reasons.”

The man said the vehicle stopped, and Mayerson’s husband got out. The two started arguing, and the man said he called Mayerson an inappropriate name to her husband’s face.

Pretty ballsy 70-year-old. Maybe not too smart, but ballsy.

That, he said, is when Mayerson got out and punched him in the face. The man said he got knocked to the ground, scratching his wrist.

And that was the last word, at least for now.

Mayerson declined to speak with investigators.

… felony battery on a person 65 years of age or older.

You can find the source, including a mug shot of Ms. Mayerson, here. Maybe this guy and the Niceville police officers are all regular Juice readers? While this is unlikely (The Juice aspires, but is realistic about his current reach), their behavior is indicative of the knowledge of a regular reader. As reported by The Northwest Florida Daily News:

On Oct. 17 officers were called to a Natheny Street residence to enforce an emergency injunction against a man, who was told to stay away from a woman and her son.

He gathered his personal belongings from a back bedroom, then put them back in the room he gathered them from.

END_OF_DOCUMENT_TOKEN_TO_BE_REPLACED 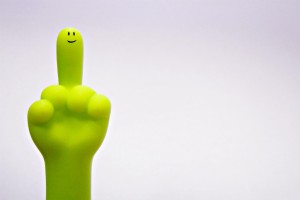 Why should police officer read Legal Juice? If they did, they would know, as all regular Juice readers do, that the Constitution allows folks to flip them off, and to cuss. Sure, they can make an arrest, but in the end, the flipper or cusser will be walking away with some cash. (For example, see this recent Juice post.) Until Legal Juice is required reading for all police officers, The Juice has no doubt that this will happen over and over again. The most recent example was reported by The Marietta Daily Journal.

END_OF_DOCUMENT_TOKEN_TO_BE_REPLACED N.I. pleaded innocent claiming that she bit her nails and scratched her finger due to a skin disease that she suffers from when the policemen “confusingly thought she flashed her finger in their face”.

The defendant claimed that she didn’t drink liquor and alleged that the food she had at the hotel was cooked in liquor.

Sources close to the case told Gulf News that N.I. provided the court with a medical report confirming that she suffers from psoriasis.

The report said she remains under treatment because she suffers itchiness in her hands and legs.

Records said the policemen spotted N.I. jumping into the backseat of a car and flashed her middle finger in their face.

The policemen chased the vehicle that carried the defendant for two kilometres then asked the driver to follow them to the nearest police station.

N.I. was sent for examination. She tested positive for liquor.

When asked about the findings, she said: “The liquor in my blood must have been there because the food at the hotel was cooked in liquor.”

What’s cooked is her goose. In addition to the 30 days in jail …

The court also fined N.I. Dh3,000 for consuming liquor and she will be deported after serving her term. Australian Christian Marchesani has unambiguous contempt for speed cameras. Well, aside from the above photo, per the Australian Broadcasting Corporation:

Since the entry before and after this (come back tomorrow!) involve “the bird” …