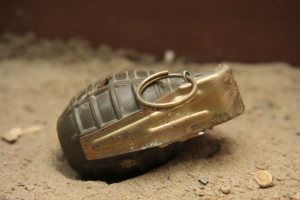 In the US, with our “zero tolerance” policies for so many things, this kid would have been suspended. Period. Fortunately for him, the boy resides in the UK. As reported at Scotsman.com:

Bomb disposal experts were called to a school in Hamilton, South Lanarkshire this morning amid reports that a pupil had brought a hand grenade into the building.

The pupil at Hamilton Grammar School brought the decommisioned device to class as part of a history project.

Explosive Ordnance Disposal officers called at the school shortly after 9:00am, and ascertained that the grenade posed no threat.

A spokeswoman for South Lanarkshire council described the grenade as a “presentation piece”, owned by the pupil’s grandfather.

The spokeswoman added: “Police were called who went to the school with bomb disposal experts. “They quickly reassured everyone there was no danger posed by the presentation piece and no need to evacuate the school.”

Ah, yes … just like the good old days here, when things were actually evaluated on a case-by-case basis. Now? Fuhgeddaboutit. Click here for the source.