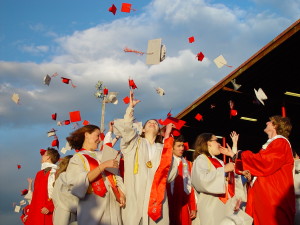 This is just so petty, and such an incredible waste of everyone’s time. As reported by wreg.com:

The pomp and circumstance did not last long for some Mississippi families.

“He said ‘you did it baby’, waived his towel and went out the door,” Walker explained.

“When she went across the stage I just called her name out. ‘Lakaydra’. Just like that,” Ursula Miller said she shouted about her niece.

Miller and Henry Walker were two of the four people asked to leave Senatobia High School’s graduation ceremony for cheering.

Police at Northwest Mississippi Community College, where the high school ceremony was held, said the superintendent asked the crowd not to scream and to hold their applause until the end.

Otherwise, they would be asked to leave. However, that wasn’t the end of it.

“A week or two later, I was served with some papers,” Miller explained. The papers threatened to throw them in jail.

Officers issued warrants for their arrests with a possible $500 bond.

“It’s crazy,” Henry Walker said. “The fact that I might have to bond out of jail, pay court costs, or a $500 fine for expressing my love, it’s ridiculous man. It’s ridiculous.”

Superintendent Foster said the charges were far from ridiculous. While Foster declined an on-camera interview with WREG, he said he’s determined to have order at graduation ceremonies.

“Okay,” Miller said. “I can understand they can escort me out of the graduation, but to say they going to put me in jail for it. What else are they allowed to do?”

“Why assign papers on someone? We don’t have money for anything like that,” Linda Walker said.

The families said they were only trying to support their loved ones and should not be forced to go to court.  The four people charged are expected in court Monday, June 9.

Here’s the source, including a video news story.