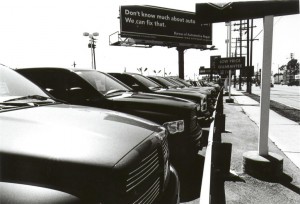 One of the first things all car dealers should cover when training salesmen is … how to protect the cars they are selling. If this was covered, this newb must have skipped that day, or nodded off. Yeah, sure, hindsight is 20/20. But that doesn’t rule out foresight … As reported by wdrb.com (Louisville, Kentucky):

“He came in at approximately about 9:30 this morning,” says Perry Luttrell, G. M. Bardstown 44 Auto Mart. Luttrell says they had no idea Ronny Stutes was on the run. He says Stutes was “Very smooth…had all of his i’s dotted and t’s crossed.”

Smooth? You can judge for yourself.

On Friday, Stutes walked away from a minimum security jail in Marion County, and on Monday he was eyeing a Ford Escape. And little did his salesperson know it was going to be part of his escape.

Get it! Using an Escape to further his mistake? HIlarious. Okay, not so much.

Luttrell says, “Normally a person comes in, we make a copy of their drivers license and let them demo the car…he said he had recently got a dui and could not drive the car so he wanted my sales associate to drive for him to go show his daughter.”

The salesman drove Stutes to a nearby Walmart, and he even agreed to go inside and find his daughter. “You know her name supposedly was Tiffany. Go in ask for Tiffany and let her know that she has a surprise out here for her,” says Luttrell.

So, you leave DUI guy alone in a car, with the keys?

But police say that’s when Stutes made his move. WDRB News has obtained surveillance video of him getting behind the wheel and driving off.

Really? You need a video to tell you that? Maybe the car and Mr. Stutes not being there would tell you the same thing?

Luttrell says, “Actually when he went in and asked for tiffany and they said there’s no Tiffany that works here and at that point he realized he…so he ran back out into the Walmart parking lot and found out that she had…that he had taken the vehicle.”

No way! Wow, what an elaborate hoax that was, pulled off by a master criminal. Or not.

And there’s more, police say Stutes drove the car to Louisville where he robbed the First Capital Bank in Fern Creek. He was eventually arrested at a nearby Walmart.

You’ll find the source, including a mug shot of Mr. Stutes, here.