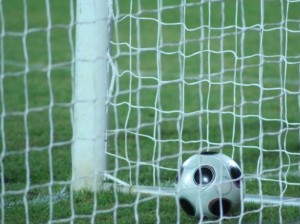 If you ever needed evidence supporting the fact that soccer fans are extremely invested in their teams, look no further than this bizarre incident. As reported by espnfc.com:

Dos Santos Abreu is believed to have struck the referee after questioning a decision. In retaliation, Jordao da Silva stabbed the player.

Having witnessed the incident, an outraged group of spectators turned on the referee. He was tied up, beaten, stoned and quartered. They then put his head on a stake and planted it in the middle of the pitch.

One man, Luiz Moraes de Souza, 27, has been arrested over the incident. Police are searching for two more suspects.