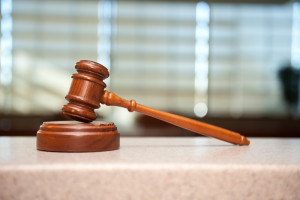 THE COURT: Call the next case please.

THE COURT: Sit him back over there in front of the table. [Uh-oh]

THE CLERK: Give me the file back. He might be under contempt of court.

THE COURT: That cost you five months and twenty-nine days in addition to the three years I’ve just given you [#1, and suspiciously shy of the 6 months that would require a jury trial]

MR. JOHNSON: If I had a gun, your motherfucking head would be splattered all over the back of the goddamn wall for —

MR. JOHNSON: Whatever man. You’re tired of giving it out? Did you finish or what?

THE COURT: Well, we can see. That’s five months and twenty-nine more. [#5]

MR. JOHNSON: Kiss my ass until you’re tired of giving me another.

THE COURT: That’s six of them.

MR. JOHNSON: So you finished giving out time?

THE COURT: I guess. Until you cuss again.

THE BAILIFF: Quiet in the Court.

THE COURT: I suppose.

MR. JOHNSON: Well, what the fuck are you holding me for then?

MR. JOHNSON: Get the fuck off me, man.

THE COURT: Call the next one.

Not thrilled with the prospect of finishing his 10-year sentence, then 3 more years for the probation violation, then just under 5 MORE YEARS for contempt of court, Mr. Johnson appealed. Who do you think won? Mr. Johnson did. The Maryland Court of Special Appeals reversed the contempt convictions.

In the instant case, the trial judge, by engaging in a prolonged dialogue with the appellant,may have provoked the appellant into repeatedly committing acts of contempt. Convictions for those acts may not stand.

The Court of Special Appeals held that the entire incident described above be considered as only one episode of contempt, and sent the matter back to the trial judge on that one count of contempt, with the not-so-subtle hint that they “leave it to his judgment what further action should be taken.” Johnson v. State, 642 A.2d 259 (Md. Ct. Spec. App. 1994).