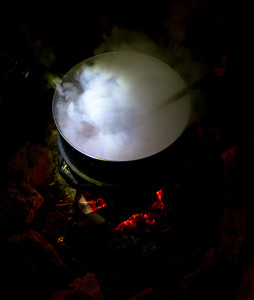 Warning: Do not read this right before, or after, eating, because it’s really, really gross. Okay, here it goes, per The Standard, “China’s Business Newspaper”

A domestic helper has appeared in court accused of trying to injure her employer by mixing her menstrual blood in a pot of vegetables she was cooking.

In some Southeast Asian cultures menstrual blood is thought to have special magical powers.

Prosecutor Vincent Lee gave a statement to the court in which the Indonesian maid admitted under caution to mixing the blood with the vegetables in the belief that it would make her employer, surnamed Mok, “more amicable and less picky.”

Perhaps this is TMI, but here it is:

Mok [the employer] peered through the kitchen door and saw the helper acting suspiciously. She entered the kitchen and found the accused throwing something into the trash bin.

When Mok checked, she allegedly found blood clot-like substances mixed with the vegetables and water in the cooking pan.

She later discovered a used sanitary napkin in the bin and called the police.

The Juice won’t be eating for a few days. And just in case your appetite is not totally gone, The Standard also reports that:

Last year, a court in Saudi Arabia sentenced two Asian domestic helpers to four months in prison and 250 lashes each for contaminating the tea of their employer with urine and menstrual blood.

In December 2007, another Indonesian domestic helper in Hong Kong added urine to the drinking water of her employer and his family.

She believed it would make the family treat her better. It was discovered after the family noticed a difference in the taste of the water. The maid was jailed for three months on a charge of “administering poison or other destructive or noxious things with intent to injure.”