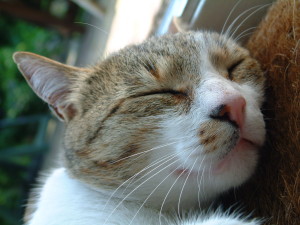 This guy could not have made it any easier for the police to bust him for driving while intoxicated. As reported by  The Hunterdon County Democrat (New Jersey):

The incident happened on Friday, July 18, just before midnight on Route 31 north near Echo Lane. Patrolman John Tiger saw a 2013 Ford Mustang stopped on the northbound shoulder with its hazard lights activated. Upon approaching the car, Tiger saw Rafael Genao, 35, of Washington sleeping in the driver’s seat while the engine was running, police said.

Tiger detected the odor of an alcoholic beverage on Genao’s breath, determined that he was intoxicated and arrested him. At headquarters, Genao refused to provide samples of his breath for chemical testing to determine the content of alcohol in his blood, police said.

Tiger charged him with driving while intoxicated, refusal to submit to a breath test and careless driving. His vehicle was towed from the scene and he was released to the custody of a responsible adult.