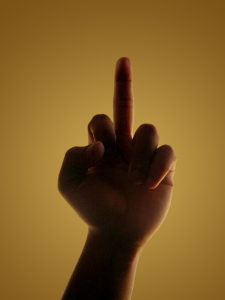 You probably already guessed that the country in question is not the United States. The country is Turkey.  As reported by todayszaman.com:

The case was opened by former Justice and Development Party (AK Party) deputy and lawyer Süleyman Sarıbaş. In a leaked recording of a phone call that was made as part of the corruption investigation, Cengiz, of Cengiz Holding, which has received lucrative state tender contracts, such as for the third airport, was heard using extremely vulgar language with reference to the nation and the public. Sarıbaş sued Cengiz for TL 10,000 over the businessman’s comment to his friend, “We will f–k this nation,” referring to the people of Turkey. An İstanbul court on Tuesday decided Cengiz must pay TL 8, 000 in compensation.

Sarıbaş has promised to use the money awarded in the lawsuit to sponsor a new ablution area and bathroom for the mosque in his hometown.
“I went to the mosque in my village in December. The ablution room and bathrooms were in very bad condition. I called on the imam and the villagers and said that once summer comes, I will have new ones made. The project plan was prepared the other day, and now his [Cengiz’s] money will go where it belongs,” Sarıbaş said.

Following the court decision, Sarıbaş also said that any citizen could sue Cengiz for his profanity targeting the nation in order to punish that kind of mentality.

Any citizen can sue? It sounds more like “this nation” is going to “f–k” him! Here’s the source.