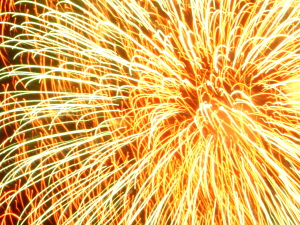 Just jumping up and down and yelling after touchdowns apparently was not a sufficient celebration for some of these folks. (Like most fans, they must not find field goals very exciting.) As reported by The Highline Times (Burien, Washington):

A resident in the Boulevard Park neighborhood of Burien called the police anticipating a neighborhood disturbance of fireworks and bullets during the Superbowl. The call went out to police on the afternoon of Saturday, January 31st. They told police that after each Seahawks scoring drive, one of their neighbors fires off “ridiculously loud illegal fireworks” but what ultimately caused them to alert authorities was when a separate neighbor began firing off a handgun after every scoring drive. Police confiscated the illegal fireworks but did not report any contact with the neighbor who allegedly fires off their handgun after successful scoring drives.

Guess they’ll all be shooting guns next year, and probably for years to come, given their youth, stellar defense, stellar running game, and a very good young quarterback (who had a bad game at the worst time).