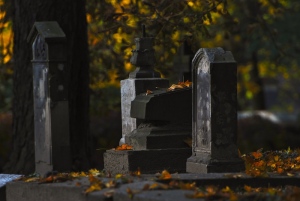 Most things work in the movies. See, that’s because movies are not real. The Juice could be wrong (hah), but it sure sounds like these bank robbers thought they were in a movie when they pulled off (briefly, any way) a bank robbery in Houston. As reported by khou.com:

The robbers were armed with semi-automatic handguns, according to the FBI.

Marquis Garr or said he saw them run out of the bank with a bag of money.

“It was really crazy because it was my first time seeing a bank robbery,” Garr or said. “When they came out, I just seen ‘em laughing.”

The suspects ran into a nearby neighborhood, but police spotted them a few minutes later in a Buick.

The cops tried to pull them over, but they sped off.

Officers cornered the suspects after they drove into the Forest Park Westheimer Cemetery.

You drove into a cemetery? Brilliant!

“I hear a lot of police sirens coming in, and you hear boom, boom, boom,” he said.

The “boom, boom, boom” Phlegm was the sound of the suspects taking out tombstones before they bailed out of the car. At least five grave markers were damaged.

“It looks like a disaster,” Phlegm said. “Maybe 5 or 6 tombstones, they’re all cracked up and broken, and it’s gonna create a lot of work for us.”

Desecrating graves too? Not cool. Here’s the source, including some scene photos and a video news story.