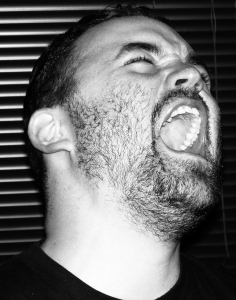 Simmer down there fellas. Or put some gloves on and hit a punching bag. But don’t do this! As reported by Per The Hamilton Spectator [Ontario]:

According to police, a man was driving his car on Mud St. W Friday when the passenger in a truck driving by in the next lane threw something out the window, striking his car.

He honked, but the truck did not stop. When the two vehicles pulled up to a red light, the truck passenger got out and waved a knife at the man in the car.

He drove away, but the truck followed. At the next red light, the truck passenger got out and threw a brick at the car windshield. Hamilton Police responded and with help from witnesses, arrested a man at his home.

Kyle David Lee, 24, of Stoney Creek is charged with assault with a weapon, uttering threats to cause bodily harm, mischief under $5,000 and two counts of failing to comply with probation.

Something, then a knife, then a brick? Whoa there fellas. You’ll find the source here.