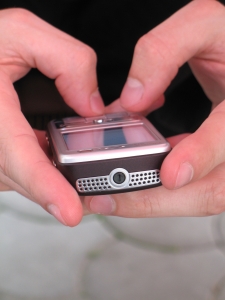 Normally it would be nice for a father to text his daughter. Here, not so much. As reported by wowt.com:

The Nebraska Supreme Court on Friday reversed a lower court’s issuance of a domestic abuse protection order for a 16-year-old girl against her father, saying his vulgar, obscenity-laced texts did not constitute abuse.

The decision came in the case of man listed in the opinion as “William N.” Court records indicate that the girl’s mother sought a domestic abuse protection order for her daughter earlier this year after the father sent the girl texts calling the girl, her boyfriend and her mother vulgar names.

A Valley County judge issued the protection order and William N. appealed. The state’s high court said that since he had not threatened to harm the teen, the lower court was wrong to issue a domestic abuse protection order.

That’s just beyond uncool. The man is lucky his daughter is a minor or the world would know his name. Here’s the source.