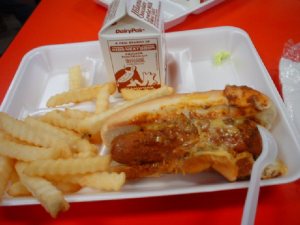 Since the dawn of the school lunch, their have been bullies around to steal lunch money. But this is not your typical lunch money shakedown, and not just because it also involves stealing lunches. No, this case is unusual because of who did the stealing. nbcphildelphia.com reports that …

A New Jersey school bus aide was arrested after she allegedly stole bagged lunches and money from dozens of preschool students.

Now that is pretty damn low.

Rosa Rios, 33, of Millville, New Jersey, was arrested Friday and charged with robbery and theft. Rios worked as a bus aide for the Sheppard Bus Service.

A Millville Police Officer said she was looking over surveillance footage from a school bus in the company back on Feb. 4 while investigating whether money was stolen from the bus driver. She then spotted Rios on camera going through the students’ backpacks, police said. In all, Rios stole lunch money and bagged lunches from 29 kids between the ages of three and five, according to investigators.

So a bunch of kids went hungry for over a month? No wonder they set bail relatively high.

Rios is currently being held in Cumberland County Jail in lieu of $50,000 bail. Police also said she no longer works at Sheppard Bus Service and the company is working with them to obtain more surveillance footage.

Click here to see the source, which includes a short video news story.