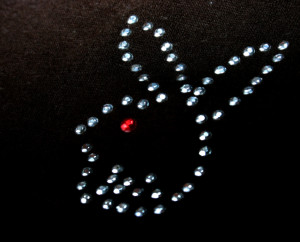 It’s just a bunny, right? Wrong, as Elizabeth Johnson, a junior at Gateway High School in Kissimmee, Florida learned. Her crime? She wore sweat pants with a Playboy bunny and the word “Playboy.” The time? Two days of detention! From a UPI article, here are the highlights:

Elizabeth Johnson, a junior at Gateway High School, said a dean approached her at school and instructed her to change out of her black Playboy sweat pants, which she did. She was forced to stay for an hour after school for two days, the Orlando (Fla.) Sentinel reported Tuesday.

Johnson said there was nothing inappropriate about her attire, despite Playboy’s connection to soft-core pornography.

“The bunny is just a logo,” she said. “There’s nothing objectionable about that.”

The school district’s dress code does not bar students from wearing any specific clothing brands, but allows officials to ban clothing with “offensive, suggestive, or indecent” messages or images.

Hugh Hefner must be loving it – giving the Playboy brand some juice with the youngsters.