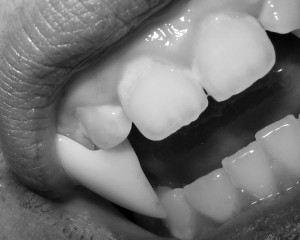 While you were trying to shoplift, the loss prevention officer was just doing his job, which sometimes, well, really bites. As reported by The New Hampshire Union Leader:

A city woman is facing a felony charge because she bit a loss prevention officer at Macy’s who caught her shoplifting items worth $800, police said.

Crystal Frechette, 34, of 28 Railroad Square, was arrested Tuesday afternoon and charged with robbery, a Class B felony.

Had she not allegedly bitten the Macy’s employee, the charge would have been a misdemeanor.

A Class B felony is punishable by up to seven years in prison, while a misdemeanor carries a maximum 12-month jail sentence, both exclusive of fines.

Yikes. You’ll find the source, with a mug shot, here.