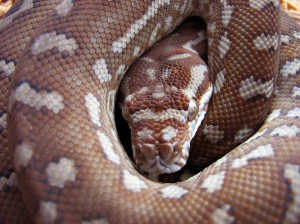 You wouldn’t be surprised to hear that the victim of a crime assisted in the apprehension of the perp, would you? But what if the victim was … a reptile? As reported by 7online.com (WABC):

The incident happened around 7 p.m. Monday on Jericho Turnpike in New Hyde Park.

The driver, identified as 22-year-old Sarah Espinosa, of Albany, apparently lost control of her Toyota Prius, crossed the median, struck a Nissan Maxima and careened into the fire station.

So what did the “victim” have to do with the crash?

… according to police, was that a stolen snake in her car had wrapped itself around her neck.

The vehicle plowed through the main door, striking two fire trucks inside.

Fire personnel who were present at the time of the accident rendered aid to the victim, at which time they discovered a small ball python snake wrapped around her neck.

They removed the snake and secured it at the scene.

Officers responded and determined Espinosa had stolen the snake from a nearby PETCO just prior to the accident.

During the investigation, Espinosa was found to be in possession of marijuana.

She was treated and released from a local hospital, and no other injuries were reported. The snake was returned to the store.

You’ll find the source, including a video, here.