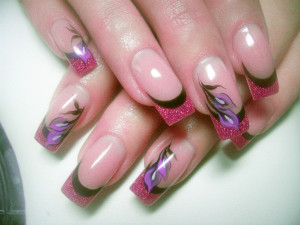 Girls wanted to get their manicure on. Totally fine. Not paying for it, and worse? (you’ll have to read below) – totally uncool. As reported by The Orlando Sentinel

Ty Nguyen called police around 2:45 p.m. Thursday after the three teens ran from MD Nails on Claracona Ocoee Road after having their nails done. The girls arrived at the nail salon and asked to have sets of acrylic nails applied, Nguyen told the Orlando Sentinel.

When the $60 manicures were finished, the teens — a 15-year-old and two 17-year-olds who the Sentinel is not naming because they are minors — refused to pay, according to police.

Not cool, but check this out:

Nguyen said he chased after the teens and that’s when the 15-year-old girl pulled out a pink Taser and shocked him.

Since they weren’t named, you’ve probably figured out that these little ladies got busted. How?

Nguyen, who photographed the teens as they ran and even as one pulled out the Taser, jumped in his car, followed them to a nearby apartment complex and called 911 to report the attack and the $180 theft.

A property manager at the Waterstone Apartments, in the 5200 block of Long Road, was shown a picture of the three girls and immediately recognized them. Officers were shown the apartment where at least one teen lived.

You do NOT mess with Mr. Nguyen!

As officers approached the unit they hear what sounded like “several juveniles yelling,” reports show. But when officers knocked on the door and announced their presence, the noise stopped.

The teens refused to open the door for at least 20 minutes when an adult resident arrived at the home with a key. Officers found the three teen suspects and several other juveniles inside the apartment, reports show.

The 15-year-old told officers she “did not pay for her manicure because someone else was supposed to pay,” and shouted, “I didn’t tase anyone!” reports show.

Officers arrested the trio and charged them with aggravated battery with a weapon, resisting a merchant and petty theft. They were booked into the Juvenile Assessment Center and the Taser was confiscated.

You had the Taser! Aaargh. Here’s the source.