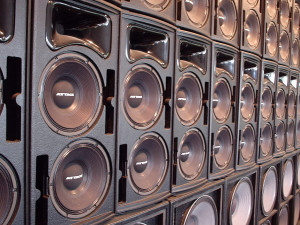 Nobody likes a noisy neighbor. What if you lived next to a bar that cranked out music – outside – from 9 p.m. – 3 a.m., from 5 speakers, nonstop? Such was the fate of some folks in Barcelona, Spain. As reported at canada.com:

Oh, and did I mention that the pub owner never got a permit for the outdoor sound system? If you think this is not a jailable offense, you’d be wrong. The owner “received a record jail term of five and a half years for “torturing” his neighbours with loud music from his sound system judicial officials said Monday.” (The pub has closed in 2006.)

Ironically, as you may have read, many inmates say that one of the hardest things to get used to in prison is … the constant noise.