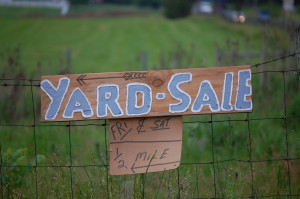 Isn’t the goal of recycling to recycle as much as you can, thus reducing our consumption of the resources that go into making the discarded items, and reducing the amount of trash that goes into landfills? So while it may not result in the greatest yard sale, more power to this gent. As reported by The Northwest Florida Daily News:

Police were called on May 26 for reports of a man going through garbage cans.

A woman called police around 3 a.m. on May 26 to report that a man was going through her neighbor’s garbage, according to the call log. She thought it was strange and wanted a Niceville Police officer to figure out why he was going through the garbage.

Officers spoke to the man on a bicycle, who said he was going through the cans trying to find things to sell at a yard sale, the log said. He was told to keep it quiet and not go up to garbage cans next to houses.

Officers were called again around 9 a.m. for a man going through garbage cans, but it is unknown if it was the same man. The caller did not want any follow up, according to the log.