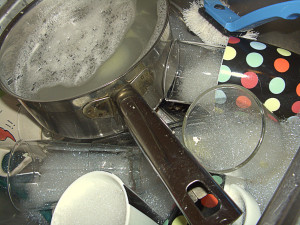 It’s safe to say there have been many fights among roommates over dirty dishes. This gent, however, took it to a whole ‘nother level. As reported by Fox40.com (Sacramento, California):

An 18-year-old man reportedly told officers at the Sonora Regional Medical Center that his roommate had thrown a porcelain mug at him during the fight [over the dishes not being done].

So he threw a mug. Wait, there was a second mug …

Police say the man told them his roommate grabbed a second mug and beat him with it.

According to investigators, a third roommate tried to help but couldn’t because the injuries were too serious.

Officers arrested 27-year-old Daniel Slawinsky for assault with a deadly weapon – the mug – and booked him into jail.

Slawinsky reportedly admitted to police that he hurt his roommate, and that the argument was over the dishes not being done.

Nope. You’ll find the source, including a photo of the alleged perp, here.