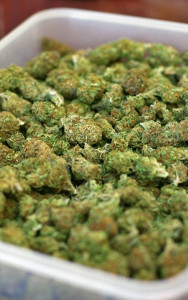 There are lots of ways to show your family some love. You might, say, try to visit your grandson in jail and bring Mary Jane. No doubt he would have appreciated it. We’ll never know. As reported in The Dayton Daily News:

Richard Heritz [age 85!], of West Chester Twp., stepped onto the grounds of the Warren Correction Institution Aug. 13 to visit his grandson. Gregory Heritz had been incarcerated at the prison for two years, and had eight more to come from a burglary conviction out of Butler County, according to prison records.

Before Heritz saw his grandson, he was pulled aside by state troopers, who were acting on a tip they had received. A few hours later, Heritz was behind bars as well, accused of attempting to smuggle marijuana onto prison grounds.

He is charged with attempting to convey drugs on the grounds of a detention facility, a third-degree felony, and possessing criminal tools, a fifth-degree felony.