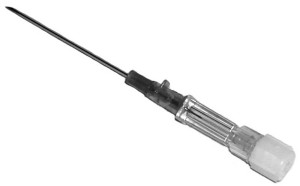 The Juice’s first reaction upon reading about this was OUCH! (That’s a piercing needle pictured above.) This was followed by OUCH OUCH OUCH OUCH OUCH! That had to hurt – a lot. For a whole bunch of reasons, this dude has to be regretting the piercing. From a report in The Jersey Journal:

Lionel B. Froloff, 32, was arrested in Hamilton Park at 2:26 p.m. Monday and charged with lewdness and endangering the welfare of children in a nearby playground, reports said.

The woman, who was sitting with her sister, told police she saw Froloff looking at her with a strange expression on his face and then realized what he was doing, reports said.

Arriving officers noticed Froloff had a pierced tongue and when the cop asked if he had any other piercings, Froloff confirmed what his victim had spotted moments earlier, reports said.

Finally, Froloff began complaining of pain in his pants and said the piercing might be infected, reports said. He was taken by ambulance to the Jersey City Medical Center for treatment, reports said.

What a way to cap off the day. Here’s the source.