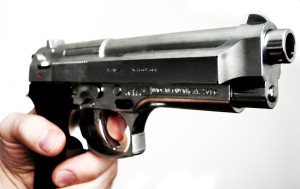 Just about everyone knows that when you are being robbed, just give them the money because your life is worth more than whatever is in the register. Remember that The Juice said “just about everyone.” That does not include a certain Popeyes franchisee in Texas. As reported by khou.com:

The pregnant Popeyes manager, who was fired less than 36 hours after a robbery, has been offered her job back.

Marissa Holcomb, who is a mother of three with a fourth child on the way, had a meeting with Z & H Foods owner Amin Dhanani on Wednesday, a day after our original story aired of her firing.

“He just apologized and pretty much offered me if I wanted to go back to his business and work there again,” she said.

Okay, so maybe now Mr. Dhanani gets it. Maybe. So what happened?

Surveillance video shows a man run into the restaurant with a beanie over his face while waving a gun. He forced all employees to the floor, then turned his attention to Holcomb.

“By the back of my shirt, he pulled me up and he pushed me to the front,” she said. “He told me to give him everything out of my safe.”

But the only thing she could open were the registers. … The unidentified robber got away with nearly $400.

Obviously she did the right thing. What happened after that?

Holcomb claimed after the robbery one of her managers gave her an ultimatum: Pay the money back or lose her job.

“I told them I’m not paying nothing,” Holcomb said, who said she was fired because she refused to pay the money back. “I just had a gun to me, I’m not paying the money.”

“I don’t think it’s right because now I’m struggling for my family because what I had to do to keep my life,” she said.

They initially referred us back to the local franchisee, but the CEO Cheryl Bachelder released the following statement Wednesday evening.

“We recently became aware of a story in Houston involving a Popeyes restaurant and employee. The restaurant is operated by an independent franchisee of the Popeyes brand. We have spoken to the local franchise owner of the restaurant, and he has taken immediate action to reach out to the employee to apologize and rectify the situation. While the facts are gathered, we will closely monitor this until it is appropriately resolved. We deeply regret the distress this situation has caused.”

Holcomb is not only being offered her old position, but $2,000 in back pay. For the pregnant mother of three, the decision is tough.

“I do need a way to support my kids,” she says. “I don’t want to go back to a business where I’m treated the same and I just get pushed back out if something else happened.”

What? No, take the money! The dude is under a microscope now! He won’t mess with you. Here’s the source, including a video of the story.