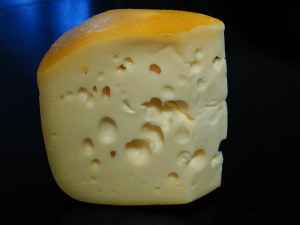 The Juice has come across some strange fetishes in his thousands of posts over the years. This may be the strangest yet, as reported by The Philadelphia Inquirer.

The Mayfair Town Watch reported yesterday on its Facebook page that the “Swiss Cheese Pervert” has been terrorizing neighborhood women.

Yes, you read that correctly.

According to the group, the suspect, a heavyset white man estimated to be in his late 40s or early 50s, approaches women while driving a silver or black sedan with his genitals exposed. He then displays a piece of sliced Swiss cheese and offers to pay the women to put the cheese on his penis and perform sexual acts on him using it.

All together now: Ewwwwww!

“I understand that people may think this is funny, but this is no laughing matter,” said Milt Martelack, the town watch’s senior adviser. “We’ve had a couple individuals reach out to us. We’re taking this matter very seriously, and we’re working vigorously with police to get this guy off the streets.”

A police source yesterday confirmed that the Special Victims Unit is investigating the man after several women from the Mayfair area filed reports describing similar encounters with a man displaying what the source called a “major sexual cheese fetish.”

And although news of the bizarre case shocked many Mayfair residents, Gabby Chest – who lives in nearby Bridesburg – recognized the behavioral pattern instantly.

In July 2012, Chest, then 19 and having just broken up with her boyfriend, created a profile on the dating website OkCupid.

Within days, she said, she was contacted by a “really strange guy,” who sent her a private message that detailed a very specific request.

An excerpt from that message, which Chest sent the Daily News, details the origin of the man’s self-described “fetish.”

“I started to compare girls to cheese due to their milky complections [sic], girls are soft, smooth feeling and tend to like dairy products more,” he wrote.

“That and typical advertising, always using a girl to advertise dairy products. So cheese is what I started to use as a replacement for having sex with girls.”

It’s not surprising, then, that Chest recognized the man who had contacted her as the “Swiss Cheese Pervert” as soon as she saw his picture on the Mayfair Town Watch’s Facebook page.

“There’s no doubt it was him; it looked exactly like the picture on his profile,” she said. “I was scared and shocked. I never thought the guys you see on those sites would be so close to me.”

Yikes. You can read more here.