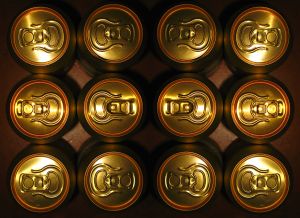 You may like shopping at Walmart. You may like working there, or you may have no choice but to work there. But if you think they give a damn about their employees, spend 30 minutes on the internet and you’ll learn otherwise.  The Juice can understand an employee doing something unwise to try to protect his benevolent boss’s business. This clearly doesn’t fit in that category. As reported by wftv.com:

A Walmart manager had an unexpected ride down a Florida Interstate in the back of a truck after he tried to stop a man and woman he suspected of shoplifting beer late Monday afternoon.

First mistake: chasing someone down for beer! What if they turned around and shot him? It’s just beer!

The manager, Mike Dawson, said he noticed the pair leaving the Titusville, Fla., store with a shopping cart containing beer. He said when he asked for a receipt, the two headed for their truck.

“I had asked them for a receipt and they kept throwing beers into their car,” said Dawson.

As the two began to back up and leave the parking lot, Dawson said he was forced to jump into the back of the truck.

“I ran up to get their license plate, but when I realized how close I was, I jumped in the back so they didn’t run me over, ” Dawson said.

The truck traveled along several streets and at high speeds down I-95. Dawson said the two stopped the truck twice.

“One time they tried to beat me up and I lost my glasses. The second time was in the back woods somewhere, I was like, ‘I’m not getting out for you to run me over,'” said Dawson.

So how did he escape?

Dawson said he used the only thing he could to try to get someone’s attention – the stolen beer.

“I kept throwing beers from the back of the truck, not at people’s cars but towards people’s cars, hoping that someone would call the police,” said Dawson.

Witness Dave Stewart said he saw the truck turn down a remote road in Brevard County, Fla. “Well, I just saw all the beers alongside the road,” said Stewart.

Stewart said as he caught up to the truck, it stopped. He said he had his gun on his hip, ready to use. He told the driver of the truck that he had called the sheriff.

“The gentleman in the back got out, and as soon as he did, the other guy jumps into the pickup truck and just leaves,” said Stewart.

Dawson said the man who stole the beer had a tattoo on his chest that read either 1987 or 1997. The pickup truck was blue with LH as the first letters on the license plate.

Investigators are still looking for the pair. They said they are checking to see if they are the same couple believed to have stolen beer from a Palm Bay, Fla., Walmart recently.

Still, nobody got the full license plate! Here’s the source, with a video news story.