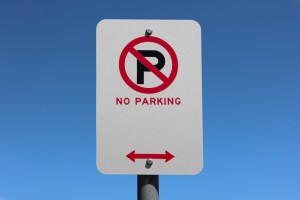 Having been ticketed for almost every imaginable violation of the traffic code (parking too close to an intersection, parking too close to an alley, parking too far from the curb, parking at a broken meter [under prior law], along with all the typical violations), The Juice no longer parks illegally. Back in the day, though, say, when he was 28, like Englishman Michael Raphel, he would park just about anywhere.