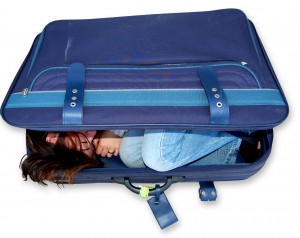 Clearly this was not the best hiding place. As reported by The Hunterdon Democrat (New Jersey):

Jennifer Keller, 19, of Gettysburg was a passenger in a car stopped on May 31 shortly before 2 a.m. on Route 523 by Sgt. Chris DeWire for alleged erratic driving.

The driver, a York, Pa. woman, told police that she wasn’t familiar with the area, and her GPS unit wasn’t working properly.

Fairly routine so far, but …

Police made “several observations that led them to believe that the driver and her three occupants were engaging in illegal activity,” and they said consent was given to search the car.

Keller had hypodermic needles on her, police said, and was taken to police headquarters.

Once there, police said that Dewire “developed reasons to believe Keller was hiding illegal contraband on or in her body.” [They found 300 grams [10.58 ounces!] of cocaine “concealed in a body cavity.”]

If you want any more info, fuhgeddaboutit. That’s all you’re getting. Here’s the source.