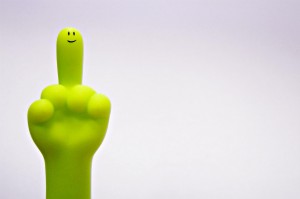 Why should police officer read Legal Juice? If they did, they would know, as all regular Juice readers do, that the Constitution allows folks to flip them off, and to cuss. Sure, they can make an arrest, but in the end, the flipper or cusser will be walking away with some cash. (For example, see this Juice post.) Until Legal Juice is required reading for all police officers, The Juice has no doubt that this will happen over and over again. The most recent example was reported by The Marietta Daily Journal.

Police followed and arrested her couple of blocks away.”They told me I shouldn’t be presenting a lewd gesture in front of children,” said Barnes.

“It’s infringing speech; the government cannot just chase down a citizen and arrest them when they speak their mind,” said Counts.

Yes, it is. Now stop wasting everyone’s time, dismiss the criminal case, and pay the lady. And next time, as difficult as you may find it, just walk away. Here’s the source.