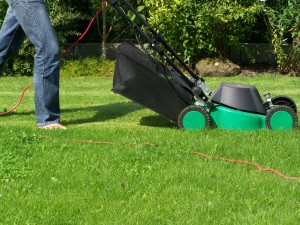 If you have issues with your neighbor, take them up with your neighbor (and do it in a civilized way!)  Leave the lawn guy alone! Unfortunately it did not go down that way, as reported at mysuncoast.com (WWSB):

According to the Charlotte County Sheriff’s Office, deputies met with the victim, the owner of a lawn service business, at a residence in the 6400 block of Thorman Road around 4 p.m. Wednesday.

The victim told deputies he was hired to mow the lawn at the residence and was in the process of doing so, when 71-year-old Patrick Botelho approached him.

Yes, Mr. Botelho has anger issues, hates his neighbor, or both.

Or else what? Well …

When the victim declined, Botelho allegedly tried to pull the victim off the mower and grabbed him around the neck, choking him so that he was gasping for breath. Another worker who was nearby trimming around the house saw what was happening and ran toward the two. At that point, Botelho released the victim and went back to his own house

Botelho was arrested and transported to the Charlotte County Jail. He was being held on a $2,500 bond.

Not cool. You’ll find the story, and a mug shot, by clicking here.