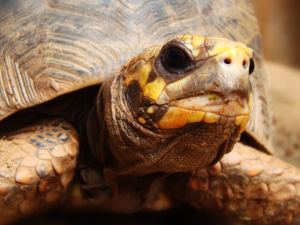 Fans of the Maryland Terrapins have a saying: Fear the Turtle. In this case, it has to be altered slightly: Fear the Turtle’s Owner.  As reported by The Palm Beach Post:

[Marie] Seymour [age 53] and her boyfriend were drinking when he said he would harm her turtle and allegedly came after her, according to her recount of the events. The turtle’s name was not released.

You did not just threaten the lady’s turtle. Are you insane?

Seymour said that in defense, she took out her knife and stabbed him, according to the report. It’s not clear where Seymour stabbed her boyfriend.

When deputies arrived, the boyfriend told authorities he did not want Seymour to go to jail.

While he was treated for his injuries at a hospital in Palm Beach Gardens, Seymour was taken to jail for booking.

Marie Seymour faces charges of aggravated battery with a deadly weapon. She was released from the Palm Beach County Jail under supervised conditions.

Here’s the source, including a mug shot