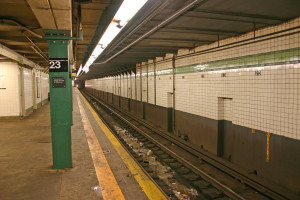 So often it’s the little things that trip up scofflaws. Take this case, where the gent was busted for a very, very minor offense, and then it kept getting worse. As reported by The Brooklyn Paper’s Police Blotter:

Police arrested an upstate man in Brooklyn Heights on drugs and weapons charges after transit officers stopped the alleged crook for hopping a turnstile on Thursday, according to a report.

Officers arrested the 32-year-old Schenectady man for drug possession and unlawful possession of a firearm after they discovered several bags of crack-cocaine and marijuana along with a loaded six-shooter in his backpack, a report said.

The officers stopped man after they say he jumped a turnstile at the High Street station shortly before 8:30 pm.

As the cops searched him they found several small bags of crack-cocaine and marijuana in his front pocket, and a search of his backpack turned up a Smith and Wesson .38-caliber revolver loaded with six rounds, according to a report. A second search at the 84th Precinct station house turned up a larger bag of crack in his pants, police said.

He had just about everything on him but a fare card. Here’s the source.