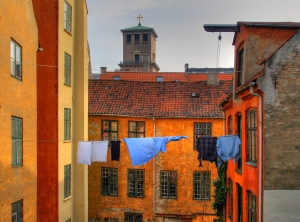 The word “locals” is used, which means that more than one person thought this item was an Isis flag. You’ll wonder about that too when you look at the picture (not the one above – the one at the link below). Anyway, as reported by thelocal.it:

Police were called to an apartment block in Porto Recanati, on Italy’s eastern coast, after locals raised the alarm that an Isis sympathizer may be within their midst.

The officers searched the building and questioned residents, but were unable to recover the mystery black cloth spotted hanging from a tree next to the apartment block.

On further investigation police discovered that the supposed propaganda tool was nothing more than a jacket, swept into the trees after being hung out to dry, Corriere della Sera reported on Wednesday.

You can see a picture of the jacket, and read a little more, here.