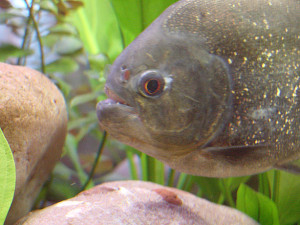 How much do you think a piranha is worth? More on that later. For now, you only need to know that, if you live in New York City, you can’t have a piranha.  But just because it’s illegal … As reported by nbcnewyork.com:

A New York City man is accused of smuggling nearly 40,000 piranhas into the U.S. by having them mislabeled as harmless aquarium fish, prosecutors said.

So a piranha is worth less than $1? Go figure.

Joel Rakower and his fish distribution company pleaded guilty Wednesday and agreed to pay more than $70,000 in fines and restitution.

Authorities said Rakower admitted buying the aggressive fish from a Hong Kong supplier that he instructed to falsely label the shipments as silver tetras, a more common household fish.

As for the legality of owning piranhas outside of NYC:

Twenty-five states either ban or regulate piranhas, which could pose a serious risk to ecosystems if they got into native waters.

What about the serious risk to swimmers? Or has The Juice seen too many movies with piranha scenes? Anyway, you’ll find the source here.