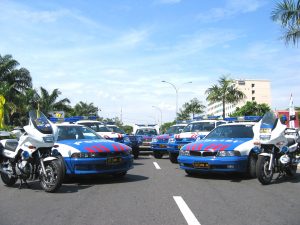 If you believe the ends justify the means, stop now. If you think that rules matter – “rules” like the 4th Amendment – read on.

Regardless of your opinion on DUI checkpoints (Where is the probable cause to stop someone when they are just driving down the road, minding their own business?), it’s the law of the land per the Supreme Court. Anyway, in this particular case, they did catch an allegedly drunk driver, but in a most unusual way. As reported by The Belleville News-Democrat:

They were operating the checkpoint along with Caseyville officers as part of the Illinois Department of Transportation’s Sustained Traffic Enforcement Program.

Neither the officer nor the motorist was injured in the crash. But both cars suffered extensive damage, police said.

The motorist was charged with suspicion of driving under the influence by Illinois State Police.