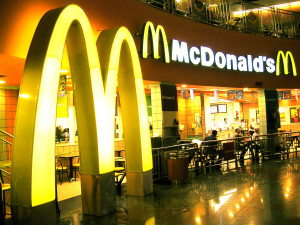 It’s so easy, in the comfort of your own home, or sitting there in your ergonomic office chair, to say that you wouldn’t have reacted as this Houston woman did. But can you really know with certainty? Exactly. As reported by khou.com:

According to officers with the Houston Police Department, the woman got upset over her drink at a McDonald’s restaurant, caused a disturbance, and then sped off [and allegedly led police on high-speed chase.]  Police said they spotted her older Mercedes with an expired sticker, and they tried to pull her over.

Okay, so perhaps she overreacted a little.

They eventually used spike strips to flatten her tires. She came to a stop on Hillcroft near Richmond.

Yikes. So what happened to her?

Police said the woman would be charged with resisting arrest. [She was taken to jail.]

Here’s the source, including a photo of the unhappy customer.