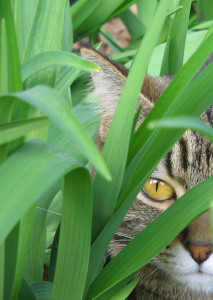 Dude. Of all people to stalk, the police? That’s what Thomas C. Massey of Traverse City, Michigan is accused of, per the Traverse City Record-Eagle:

Massey spent a good portion of Monday shouting at officers and making a profane gesture at them as he paced around the building, police said.

It wasn’t an isolated incident. Police contend Massey heckled and harassed local officers since at least March, and he’s often spotted around the law enforcement center.

Massey, of Traverse City, was arrested in March after he crept around the Grand Traverse County Jail property taking information from jail employees’ license plates and peeping in their cars, Emerson said. Charges weren’t approved in that incident.

On Monday afternoon, Massey — who police said was clad in a Hawaiian shirt and a Christmas tie — approached an officer who pulled into the lot behind the building. The officer asked Massey if he needed help, and he began to spew profanities.

Massey repeatedly refused to calm down, so officers arrested him. He allegedly struggled and “body checked” a patrol vehicle and broke a mirror during the arrest, Emerson said.

The charges? Two minutes in the box for body checking a police vehicle…

Grand Traverse County Prosecutor Al Schneider charged Massey with attempted malicious destruction of police property and disturbing the peace. He remained in custody Tuesday afternoon and is expected to be arraigned today.

Why the animosity toward the police? Not a clue.

“Nobody seems to know why he has a beef with us or what his problem is … it’s just bizarre,” [Capt.] Emerson said.